Please find me at theafricanagora[dot]com.

For Love of Country, part 1

I see you through the eyes of others

Whose written words are clear images

Of places I have yet to visit

And smells and sights and sounds I have yet to encounter

The soft whoosh of the leleshwa

And the scent of mimosa

Are foreign to me

Whose senses have known mostly the choking smell of ‘DSL’

The stench of burnt wood

And, on occasion, the earthy scent of rain-soaked quarried stone

My eyes long for the highlands that Delamere set eyes on

The vast fields that Blixen espied from a biplane

The beaches that Kuki and company flew to

After feasting on the breathtaking views of the lake

That jade sea, so far in the North, yet as much a part of you

As the southern salty lake of Magadi is

Your bounds, drawn up by strangers from afar

Ensured within a mix of flora and fauna

A bounty so rich in beauty and splendour

That even the early ‘pioneers,’

Whose trekking and surveying and subsequent track laying

Brought them to swampy mile 217

Were in awe of the mix of bush and game; the zebra and eland and lion and giraffe

The acacia and grasses and native flowers

Medal to the pedal

An opinion piece (actually, someone’s comment below the article) in The Star got me thinking. What if Nairobi (if she truly wants to be called the Green City in the Sun) embraced bicycling on a city-wide level?

Don’t get me wrong – I am not ignorant of the fact that a good number of Kenyans use bicycles as a form of transportation. However, I’m not sure they get as much respect as motorists do. Wouldn’t it be great if Nairobi had designated bike lanes and bike maps (maybe she does? Does anyone know?). It’s such a green* way to navigate, and the healthy side effects are surely a welcome bonus.

I recently read The Pedaling Revolution by Jeff Mapes, and found it really inspiring. Although it is intended for an American audience, I think Kenyans would benefit from reading it.

Picture this: people of all ages and social classes doing the daily traffic dance on their black mambas (or Schwinns or Bianchis) during the morning commute.If Copenhageners can do it (and do it in style, too), rain or shine, why can’t we?

*By “green” I mean sustainable, and by sustainable I mean embracing actions that will positively impact the generations that follow us; bicycling means less dependence on oil, decreased road congestion and better health overall (for the commuter, this means two gym-free cardio workouts a day!).

On cities. Or, the blog post with[out] a thesis

Jane Jacobs has been momentarily shelved.

As have a lot of other books that are on my summer reading list. If  I don’t finish the book, it might end up being a “yes, I’ve heard of it! No…I really only skimmed a few pages; isn’t it about such and such…no? Well, it’s on my shelf, maybe I’ll take a second look when I get home” at dinner conversations in the future. There is a certain tedium that accompanies the topic of sidewalks and their relevance (yes, I am only on the third chapter). Perhaps if there were some incentive, like a grade or a really good cup of coffee (accompanied by stimulating conversation on the nature of African cities), I might be a little more enthusiastic. Oh, well.

I love cities. I do. I have lived in a grand total of … two. Nairobi and Manhattan. They are alike in many ways, and yet so different. I have discovered that there is, to quote a friend of a very good friend, a “certain indignity” that accompanies life in cities. I think this is especially true for the average citizen (or the 99%, to use a cliche). In Manhattan, for instance, I lived in a six (or was it five?) floor walk-up whose only amenities were the front stoop and the perpetually strange smelling entryway. Ergo, laundry was a public affair. I’m grateful that the laundromat was only a short walk from my apartment, but I it took me a while to get used to the idea of transferring my pajamas and other personal articles of clothing from the washer to the dryer with a complete stranger staring in my direction the whole time.In Nairobi I lived in a semi-suburb, fifteen minutes drive from the central business district. There, I could afford to have clothes that smelled of good old sunshine and that were free to flap in the breeze well out of sight of prying eyes. Ah, to be primal again.

And then there is the issue of transportation. For a brief period in my college career I worked for the MTA  and was required, like a good number of Manhattanites, to make the early morning commute from Harlem to somewhere around Wall Street (no, I wasn’t paid for the job – it was an unpaid internship; no, it wasn’t glamorous; yes, I did see quite a few of those stock-broker types with the expensive suits and and slim briefcases). Being packed like sardines in a subway car is not unlike the feeling of being squeezed into a Nairobi matatu during rush hour.

I am going somewhere with this. I have a point. Oh, yes: I love cities. However, I’m not sure I know how they work. I guess that’s why I’m reading Jacobs. 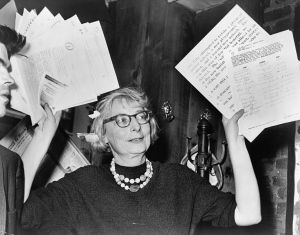 I was first introduced to Jane Jacobs* when I was in my first year of architecture school. I  had to do a number of readings for a class called “The Built Environment,” and Jacobs was among the authors on the list. Somehow I managed to do well in the class without a single glance at any of her writings; however,  I did come away with the impresssion that she was a woman who knew a lot about cities.

Fast forward to a couple of years later, when I was reading a web posting on the development of cities on the Architecture Kenya website. One of the comments cited Jacobs’ The Death and Life of Great American Cities. Eager to join the discussion but clueless about the book, I jumped in with a few opinions of my own, certain that the tidbits I had gathered over the years about Jacobs were sufficient to make me a qualified analyst on the proper way to develop cities.  Clearly, I was wrong. Thankfully, the animated debate I had hoped for fizzled out after a couple of comments and replies, but I came away from it knowing that I wanted to know more about this woman.

Last winter, I finally bought the book.  I am yet to finish it (work gets in the way), but what little I have read strikes me as pure common sense. Anyone who lives in a city and happens to have eyes will agree with what Jacobs says. I live in Manhattan, and the scenes she depicts in her book are all to real for me, even though she was speaking in the ’60s.

I’m hoping to provide short summaries of what I’m learning as I go through the book. I’m still trying to understand the relevance of her writings as they relate to African cities, particularly Nairobi, which operates a little differently than its western counterparts.

So far, I’ve read and reread the introduction and first chapter. I also went through the acknowledgments (I like to read them in case I come across a name I recognize). She mentions Edmund Bacon (the well known urban planner whose son is the actor Kevin Bacon) and William Whyte (who mentored Amanda Burden, chair of the New York City Planning Commission). She also mentions her husband, with whom I imagine she had spirited conversations on the nature of cities.

The first statement in her introduction has a clarity that to me, is reminiscent of Jane Austen’s opening statement in Pride and Prejudice. The kind  of statement that sets the stage for what is to follow: “This book is an attack on current city planning and rebuilding. It is also, and mostly, an attempt to introduce new principles of city planning and rebuilding.” Very direct and to the point. That first sentence determines whether or not you will continue reading.

Amidst colorful phrases like “vapid vulgarity” and “galloping gangrene,” she clearly lays out the origin of conventional city planning. Apparently, it all started with Ebenezer Howard who (naturally) did not like what he “smelled…” in London in the 1800s. Corbusier developed Howard’s ideas further with his Radiant City. Also to blame was the City Beautiful movement, which had architects like Daniel Burnham at its  head. And thus our city planning practices began, with nary a thought to the consequences on the inhabitants.

I am currently rereading the first chapter, and will share what lessons I learn from it. I find it interesting that Jane Jacobs wasn’t  a professional in the field of planning. She simply used her senses. I’m hoping we will, too.

I’m hoping this blog will be an avenue for my thoughts about architecture and urbanism in Africa. A place where minds (both amateur and professional) can meet and discuss issues that are relevant to African towns and cities.